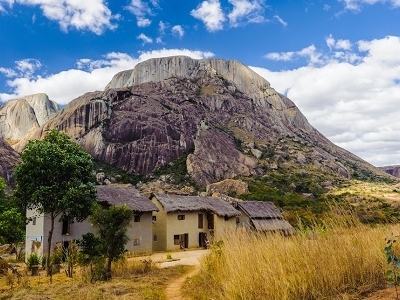 Besides the famous cartoon “Madagascar” this country is relatively unknown by many. Madagascar is an island located 400 kilometers east of the African continent. It is the fourth largest island in the world. The land area is around 581,540 km² (224,533 sq miles) and thus about as big as France and Belgium put together or twice as large as the state of Arizona. From north to south the longest distance is 1580 km, and from east to west the longest distance is 579 km. The highest point is the Maromokotro with a height of 2,876 meters.The capital of Madagascar is Antananarivo with an estimated 1.5 million people. Other major cities are Toamasina, Fianarantsoa, ​​Mahajanga and Antsirabe.

Madagascar is also called the “red island”, a reference to the red-brown earth. Because of the central ridge that runs across the island, Madagascar has a very varied landscape. In the north the Montagne d’Ambre mountains has forests that are full of ferns, palms and other huge trees. A little further south lies the Ankarantra volcanic mountains that contain many caves, caverns, limestone formations and underground rivers. The ridge continues to the north and south with an average altitude of 1500 meters. The climate of the east coast is tropical and moist and this is where one can find the tropical rainforests. The southwestern tip of Madagascar is a very dry desert area with enormous thorn hedges. Madagascar has a tropical climate. In the winter months the temperatures are around 20 to 25 ºC (70 ºF) and in the summer around 25 to 30 ºC (80 ºF). The summer and winter seasons are opposite to those of Europe and the USA. 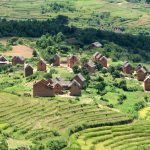 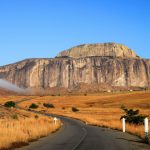 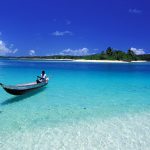 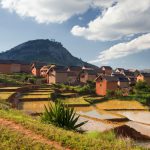 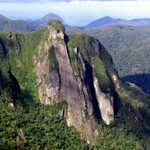 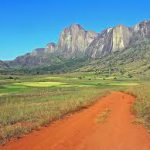 Besides the diverse landscape, Madagascar also has a diverse population. Madagascar has around 24 million inhabitants. It is suspected that the first people settled around the beginning of the Christian era, coming from Malaysia and Indonesia and East Africa. This means there is a variation between different groups in skin color. The main ethnic groups or tribes are the Merina located around the capital, the Betsileo found south of that, the Betsimisaraka in the northeast and the Sakalava in the west. In total there are more than twenty ethnic groups, sub-groups and clans. Malagasy and French are the two official languages ​​of Madagascar, but there are several other dialects.

The Afro-Asian origin of the Malagasy people has produced a complicated belief system. The main religions are:

The most famous ritual of Madagascar is the reburial or Famadihana. It is the most direct way to get in touch with the deceased ancestors. During this ritual all the dead are removed from the family tomb. There is dancing and partying with the dead to show the family members and invited guests the importance of the deceased.

Another phenomenon is called fady. Fady is the belief in taboos. An example: “It is dangerous to give an egg to someone directly; it should be placed on the ground first.” With the Antaisaka people it is still a taboo to have twins, and to this day infants are being slain after birth or abandoned in a forest. There are many fady, rules and practices in Madagascar and these vary greatly by region. 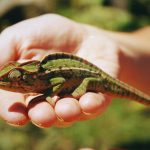 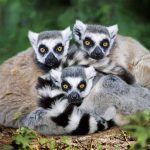 Due to the isolated location as an island, Madagascar has unique flora and fauna. Many plant and animal species are found only in Madagascar. Of all the mammals in Madagascar lemurs are the most famous. Of these primates there are about fifty known species. Lemurs have foxy faces and their hands resemble those of humans. The most famous lemurs are the brown lemur, the ringtail lemur, black lemur and the indri’s.
The largest carnivore in Madagascar is the fosa, a feline that feeds on lemurs. Compared to mainland Africa the island has no other big game like elephants, lions and giraffes.
The most famous tree of Madagascar is the baobab. They are thick, round trees with a flat crown. They can be thirty meters high and the strains can hold sixty liters of water. Madagascar has 7 species and they can be up to two thousand years old. The tree plays a role in many 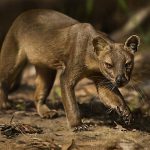 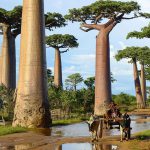 African myths and legends. The bark, fruits, leaves, wood and almost every other part of this tree are used by the population.

In the year 1897 Madagascar became a colony of France, and in 1960 she received her independence. Over the years the country has seen several presidents accompanied with dubious elections and riots. The people and economy has suffered greatly because of the political unrest. At present, Madagascar is ranked number 10 on the list of the world’s poorest countries. 92% of the population lives below the international poverty line. More than half of the population lives on agriculture. The exports consist largely of agricultural products. The economy is growing very slowly because of corruption, poor infrastructure, isolation and natural disasters.
Madagascar is the largest producer of vanilla in the world. Furthermore, Madagascar makes about one third of the world production of cloves. Madagascar has a lot of minerals, but because of poor accessibility and poor infrastructure little is exploited.
About 60% of the population is illiterate, and this percentage is likely to become even higher. One reason for this is that more and more children are taken out of school by their parents to help increase the family revenue. 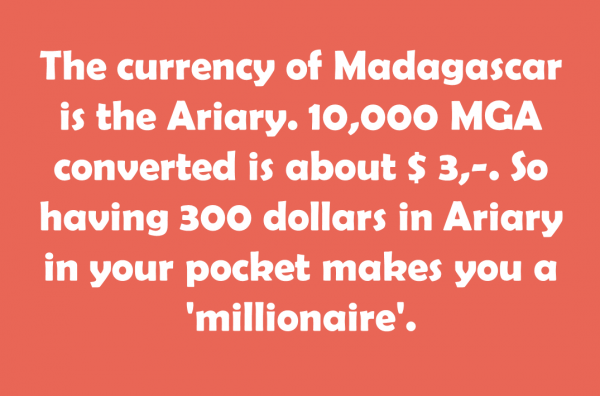 Madagascar has one main road on the island with a few branch roads. This road runs from the northern tip of the island to the south east tip. Only the main road and several important branches are paved and in good condition (with here and there some potholes). The other roads are in poor condition and only passable by 4 wheel drive cars and taxis. Private cars hardly drive there and most passengers shall take packed minibuses. Local transport is mainly by foot, bicycle, ox carts, local buses, hand-pushed carts and rickshaws (pousse-pousse). 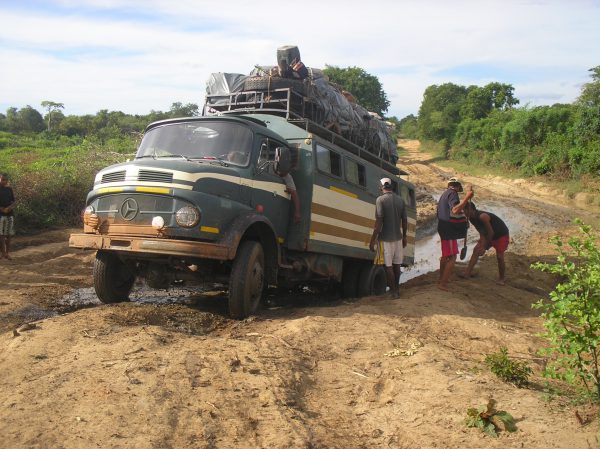 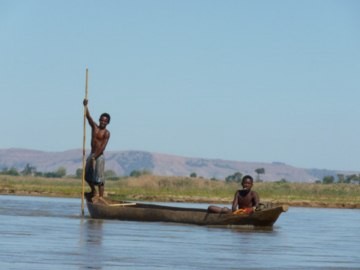 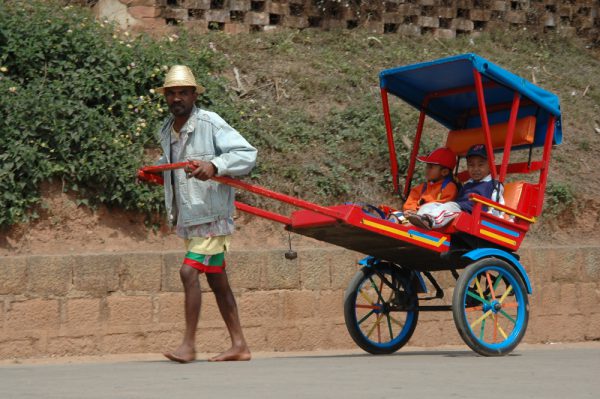