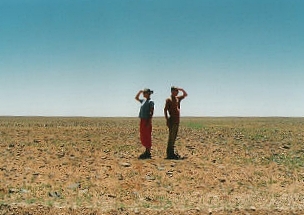 ‘Is this all there is to life?’ regularly they asked themselves that question. They lived together in a nice apartment, both of them had nice jobs and their relationship was a solid one. However that gnawing feeling and restlessness stayed. They were not really happy in the Netherlands and both experienced a feeling of emptiness. Together they had decided not to buy a house, but instead to leave everything behind and travel around the world. Away from the life that was without a clear goal of satisfaction, but moving forward to discovering the world and perhaps finding themselves.

Traveling began in Eastern Africa, where they found themselves in a beautiful world full of wildlife and a variety of animals, but also in a world of unbelievable poverty.
One day they overheard a conversation between a man from a western country and a local African man. The African asked the person from the west if he believed in God. This man answered that people from the western countries don’t need God, because they already had everything they could wish for. Deep in their hearts Arjan and Amanda knew that this wasn’t true. God is not like Santa Claus who only gives ‘presents’ and then leaves. God wants to be a father to everybody, rich or poor. They had learned that from the time they were young. Both of them were brought up in Christian homes and as babies had been sprinkled as a sign of belief. But now they lived in their own world, without God, like so many others do.

WHERE ARE YOU GOD?

After 4 months of meandering through Africa, Amanda prayed to God that she noticed very little of Him in Africa. By chance they met the next day two missionaries, and they had a long discussion with them. This was not a coincidence, because from the time they arrived in Africa and while traveling around, they did not see or meet any other missionaries. God hears prayers and lets Himself be found by those who seek Him.
The missionaries told them a clear message: Jesus has taken away our sins on the cross. Everyone is in debt to God. Jesus, the son of God, is the only way to God. He is the only way to mend things between us and God. It is not possible to do this through your own power and not (like so many others think) by living well in the eyes of yourself and others. A sin is not only stealing or murder or telling lies etc. But the biggest sin is to live without God and not accepting Jesus’ sacrifice.

The missionaries also told Arjan and Amanda that God wants to give every human being a new heart, that is tuned on Him. A heart filled with God’s Spirit and nature. Only then can a human being find true satisfaction and a goal in his or her life, namely a restored personal relationship with our Creator.
This is a message they had heard before from Amanda’s mother, who was converted a couple of years before and talked happily about Jesus. But now they heard the very same message somewhere else in the world. Perhaps her mother did not just tell strange stories after all.
After this conversation they became even more inquisitive to what the Holy Bible had to say. The missionaries told them that it was very clear that Jesus would come back very soon. The whole world is collapsing with all the unsolvable problems, such as: environmental issues, deforestation, wars etc. This is clearly to be seen in Africa. The missionaries said that all these happenings are written down in the Bible. 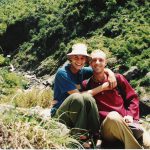 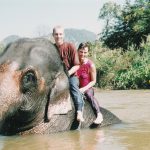 After Africa they traveled extensively through Asia and discovered that there were so many different religions. They noticed with these religions that people had to seek the love and power in themselves. That’s easy for those who are rich with enough resources and also have confidence in themselves. However if you happen to be poor and helpless, then you are on your own. In observing this, Arjan and Amanda missed something essential in these religions.

.
At various places they travelled, they were offered a flyer about Jesus and God’s miracles. God didn’t stop to get their attention and point them to His salvation. They started to see that it was God who was speaking to them and not just people.

A MIRACLE FROM GOD

They traveled on to Australia. After a couple of months Arjan prayed to God in a special way. He wanted to start running again, which he had done previously in Holland. But as always in his case, when he wanted to run, his old injury started flaring up after a couple of weeks. He had a broken tendon in his knee. He had to think about the words from Amanda’s mother: God is still a God of miracles. And he prayed: God, if You exist and heal my knee I shall read the Bible and serve You. After just a few weeks the running went very well and a few months later even better. God is a wonderful healer and rewarder for those who earnestly seek Him! Arjan gave his life to Christ.

After a couple of months God reminded Arjan of the rest of his promise. This happened in a dusty village in the Australian desert. But how do you bring this news to your partner, who knows nothing about your miracle and about you being busy with the things of God? A smart trick was to mention the missionaries and to say that it was about time to read the prophecies themselves. And so they went to a Christian bookstore, full of books and many Bibles.
After 2 years of traveling their English language had improved tremendously, but reading an English Bible is so much different from reading a book. Still, they went inside the bookstore and of course God had already made His preparations. To their amazement between all these books there was one Dutch Bible and it was even on sale at a discount price. This happening was not a coincidence. God helps people further if they make a step towards Him.

They both started to read the Bible, but they kept that a secret from each other. They actually were ashamed that someone could be occupied with something so ‘old fashioned’. When Arjan was out running, Amanda was reading the Bible, and she would put the Bible back in place. When Amanda was out, Arjan did the same.
There are so many people who are ashamed of believing in Jesus. Look at birthday parties. You can practically talk about anything, but if you talk about Jesus or God then all of a sudden conversations stop and it’s quiet or quickly changed to some other issue. This is also what happened between Arjan and Amanda.

Amanda had the feeling that while she was reading the Bible that God really spoke to her. When reading certain parts or statements in the Bible she felt she could start to cry, because she felt approached by God. It was very clear that God was asking her to become His child.
God wants to have a deep relationship with human beings. He will never force Himself. However, if people earnestly seek Him, He wants to be found and He wants to be a personal loving Father. Amanda knew that God had called her, but her natural character was as someone who thinks and thus came the responses.

After many thoughts of doubts, Amanda decided to make the decision to accept God and not to keep Him of her life anymore. In the desert of Australia she knelt down and she gave her life to God and asked Jesus to forgive all her sins. She was pervaded with peace and happiness.
The search was over. The quest for truth in her life was found. She received peace with God.

THE MANY YEARS OF GNAWING RESTLESSNESS AND UNHAPPINESS
TURNED INTO REST AND PEACE!

After two and a half years Arjan and Amanda returned back to the Netherlands. Only at that time it became clear for Amanda that Arjan too had given his life to Jesus. He had kept it to himself because he found it a personal matter. From then on they could talk about it without any restraints and had a great desire to grow in their relationship with God. God already told both of them in Australia which church to attend in the Netherlands to be trained by Him. There they were filled with the Holy Spirit and were baptized by emersion. Then something wonderful happened.
Something very clear came into their hearts. They had lived together for 5 years and they felt it was not the wish of God. None of the Christians in their church had yet spoken to them about it. But God had spoken to them the day they were filled with the Holy Spirit! A choice had to be made. What do you do when God speaks?
They decided immediately to separate sexually and make plans to get married. God blessed their decision enormously, because in the months before the wedding took place they had no unbecoming feelings towards each other. God had taken those feelings away from them, because they obeyed the Word of God. God is so good!

The A-team was born.