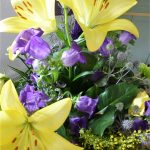 Hello dear people. Such a long time ago! Where to start and how can we keep it short?
The fact that it has been quiet for a while on our part does not mean that everything here was at a standstill. On the contrary. We can say with all our hearts: God is at work! (and not just a little bit).
In the past months both our parents have celebrated their 50-year wedding anniversary. Which, of course, required a few preparations and surprises. Wow, what a blessing that they have been together for so long.
The little Bible study groups are going steadily, are very blessed and the Lord makes us all grow. We were also asked to share the Word several times in a Sunday service.
Amanda has finished recording the audio series of the lessons: God’s story to us. In all local supermarkets we have put little advertisements to invite people to listen to it or free.

As we mentioned before, when we returned from Madagascar, the Lord had already told us that we would be in the Netherlands for a longer time. Not knowing how long or why, but God does not always show the whole picture to His children. As for the corona commotion, His earlier indication did become clear. But even closer to home, we began to see God’s reason for our longer stay on Dutch soil.

Last winter, Amanda’s mother began to have problems with her health. Slowly, she began to have more and more pain in her body. She wanted to trust in the Lord for her healing, as God had miraculously healed her several times in the past. Again, God had told her personally that she was healed by His stripes (1 Peter 2:24). So she decided not to go the way of doctors and trust the Lord for His miracle. Still, we did not see a breakthrough and this whole thing put us in a position of much prayer and seeking the Lord how to step into His victory.

A few weeks back, the pain was too much to fight with ordinary painkillers, so a doctor was called in for a stronger remedy, without letting go of trusting in God’s miracle. Of course, these people are very good at their jobs and further investigation was undertaken to discover the reason for the pain. The Lord had already made it clear to us what was going on, so we were prepared for the doctors’ report. They told us they had found cancer that had spread and determined that it was beyond their power to cure.

But how wonderfully that conversation went! Three people from the medical team and three children of the Most High God facing them. There was a wonderful peace and tranquility as ‘the die was cast’. The sincere response of Amanda’s mother to the question, what was going through her mind right now was, ‘I’m not panicking or anything’. God gave us supernatural confidence in Him. It almost seemed as if this death sentence slipped right off our backs. It didn’t change much about our case, because our hope and trust were already focused solely on God. We didn’t have to make that shift anymore.

But now what a blessing it is that Amanda’s mother is now receiving stronger painkillers and so can once again boldly move forward for God’s promise for her healing.
Now when the miracle breaks through, everyone must confess that it was God who did it. To Him be all the glory!

Our faith grows stronger every day. The Lord is working His plan. He continues to encourage us to stay focused on Him and the coming miracle.
Here is an example of such an encouragement:
A few weeks back, a brother who prayed together with us on the phone had a clear picture of a bouquet of flowers with Amanda’s mother. There were no flowers in the room, yet he had a strong impression that God wanted to make something clear with this and that God wanted to give those flowers to Amanda’s mother as a gift. He said he saw a beautiful bouquet of purple and yellow flowers. Very sincerely Amanda’s mother then accepted those flowers in faith from God.
Fourteen days later someone, who knew nothing about it, appeared with a beautiful bouquet of PURPLE AND YELLOW FLOWERS for Amanda’s mother. God had delivered His bouquet!

God’s message in this jumped out:

All glory to Jesus!

Pray with us and thank the Lord for His miracle that will break through.