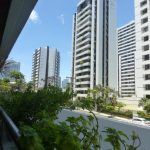 We had a very blessed fully booked week in Salvador. Last year we had been here as well and we were received very warmly again. Brazilians are generally very open, expressive and cordial. So hugs and kisses on your cheek are very normal whether you are a man or a woman (even if they don’t know you yet). We were very spoiled by pastor Joe and his wife Christina. They had arranged an apartment for us, so we all could stay together as a team and a translator. Pastor Fabiano from Sao Paulo also travelled with us this week. (more pictures)

There we were between the skyscrapers in the middle of Salvador. One week you are in all the beauty of nature and give a training under a tent and the next week you are in a concrete jungle of a metropolis.
We had déjà vu moments how they drive here like crazy. Cutting each other off, driving on 2 lanes at the same time, changing lanes as if you were avoiding pawns, driving criss-cross the 5 lanes as if in a computer game and last but not least the motorcycles that skim by between the cars. Praise the Lord for protection and a strong stomach! 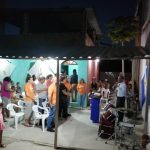 In the church of pastor Joe we gave a training about hearing God and prophecy. Here too, people picked it up eagerly and on the last evening, 22 believers were ready to step out in what they had learned.
In addition, we were able to bring the Word in 2 other churches. One church was a lively group that came together in a theatre building. And the other was a group of Christians on an island near Salvador. The service was held in the back yard of a house and the street in front of it. The neighbors took their seats and listened to what was being proclaimed. Wonderful!

Here are some testimonies of the many miracles that God has done. We were invited to pray for someone at home. The man had diabetes. There were already 5 toes removed. And for 2 years the wounds did not want to heal. We prayed for his healing and several of us had a specific word from God for him. It turned out that he could not let go of the past and had become bitter. He acknowledged this and after further talking, he was ready to give everything to God. He felt very relieved. Immediately he started to measure his bloodsugar and it turned out to be normal. A day later we heard from his wife that he hadn’t had to take insulin that day (which normally had to be done twice). We serve the God of the impossible!

After the service on the island near Salvador a woman came for prayer. She had breast cancer. After prayer she felt the lump and said that it had become smaller. So we prayed again and every time the tumor got smaller until she couldn’t find it anymore. This is our Daddy! She was very happy and thanked God.

A tennis coach had his knees badly damaged through a motorcycle accident 7 years ago. He had been told that it would never be okay again and he was always in pain. After prayer the pain was completely gone. He was very touched by God and wanted to dedicate his life to God. 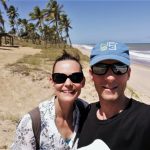 Staying flexible is a must on a mission trip, because plans change sometimes. We would also go to the city Natal to give a training. The city with beautiful white sand dunes where we went last year. But the church that invited us is still in the middle of a relocation of the church, so indicated that it was not possible to receive us now. But all of a sudden a church in the capital Brasilia wanted to invite us. So the agenda is filled again for the coming week! Yesterday we started the new adventure in Brasilia.