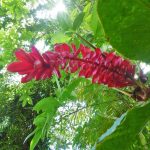 Time for a new update. More than a week has passed and it was packed with great experiences. How do you tell all this in a message?!
The training weekend about prophecy in the church in Sao Paulo was well received. It is a lively church and the Christians here are very enthusiastic to put into practice what they have learned. During the last service they were asked if they wanted to prophesy over each other. Everyone was looking for someone to bless the other with words from God. Wonderful to see. People cried and were very encouraged. (see pictures)

Last Tuesday we drove with our rented car to Paraty, a city on the coast of Brazil. You really got the feeling of being in the tropics. We strolled for 4 hours through beautiful green forests with a huge diversity. Lianas, palm trees, bamboo, fern trees and much more, all scattered over pointed hills. What a treat. And more was added, the blue ocean with many islands.
The first day there were no meetings planned and the pastor had decided to take us on a boat trip along the coast. Beautiful! The only thing was that it rained all day. But that couldn’t spoil the fun. We sailed along the green coast with 167 islands and 365 beaches and enjoyed God’s creation. 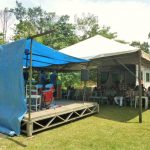 Uilliam, the pastor had enthusiastically decided to plan 3 full days of meetings. On a piece of land near his house was the half-finished church building, but they had put up a large tent in front of it for shade for the visitors. Together with Anthony we switched leading the services to train the enthusiastic people. Many were amazed at what they learned from the Word about God’s healing and His will.
One of the students prayed for his brother’s back, which was damaged by a motorcycle accident 6 years ago. During prayer he felt it pop 3 times in his spine and then he was completely healed! Thank you Lord!

Every day someone from the church had cooked us a delicious meal and we often enjoyed a true feast with fresh fish and delicious fruit. We don’t have to worry about losing weight here in Brazil, because they also love sweets.
The people often mentioned how grateful they were that we had come to train them.

On Saturday we went to the hospital with a group of 15 enthusiasts and were able to pray with the sick and nurses on all wards. Several Christians saw a miracle happen for the first time while praying for a sick person. A living God who works together with His children! Praise the Lord.
The training on healing was finished but there was still time left, so we decided to train them further in prophecy and passing on God’s words. This was completely new to most of them, but during the practical exercises they all jumped into the deep end.

The same evening after the service, these champs were in front and gave God’s words to those who needed them. We as proud “parents” watched as the kingdom continues to be built. Also 10 people gave their lives to Jesus. Hallelujah!

In the meantime we are back in Sao Paulo and tonight we will fly to the next destination, Salvador, a city in the north of Brazil.
On to the next adventures!