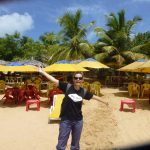 In Natal most of the meetings were planned during the weekend so we still had a fair amount of free time. The local Christians were very hospitable and wanted to show us the most beautiful places of Natal. Natal is known for its beautiful tropical beaches and sand dunes. So we took our chance!

First we were taken to the largest cashew tree in the world. This tree does not consist of 1 tree trunk, but has many trunks and branches. When the branches touch the ground, new roots form again. The tree has thus grown to a surface of 5 soccer fields. A true cashew forest. (more pictures)

Furthermore, we saw from a cliff turtles swimming in the sea. We have delightfully floated in a warm ocean with beautiful sandy beaches. Enjoyed local dishes consisting of fish and shrimp. Visited an old fort from 1598 with a view at the Atlantic Ocean and the modern city of Natal. We saw dolphins swimming in the bay while we were having breakfast.
We were invited to have dinner with several warm-hearted Christians at home. And ate in a restaurant where they serve meat ‘all you can eat’ at your table constantly. We had a spontaneous photo session on a cliff with a photographer who won 11 awards in Brazil. He visits the church we ministered to and wanted to bless us.
And as icing on the cake we did a buggy trip through the white sand dunes. While yelling, we were grazing the dunes with bends and steepnesses like a roller coaster.
We are so blessed! 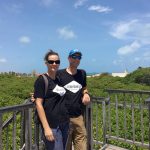 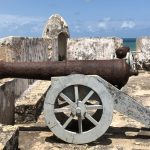 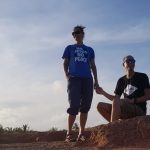 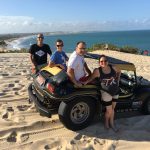 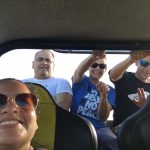 The services in the church were also blessed. Different Christians received new revelations from the Word of God. And many were healed of sicknesses, such as worn knees, depression, intestinal problems and cataract. 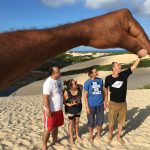 The end of our month in Brazil came in sight all too soon. We said goodbye to Anthony and Daisy. The team is split up again. Everyone goes their separate ways to spread God’s love in other places.
Back in Sao Paulo we had to wait another 10 hours for our flight to Angola. Well, if we survived 12 hours waiting last time, we will also survive 10 hours. After all, we now know all the corners of the airport.

Our heavenly Daddy always has beautiful surprises. Guess what! At the airport in Angola we met the same woman who had given us money on the previous trip. Her destination was Johannesburg too. How do you come up with that! The only person we know throughout Angola! The beauty is that Arjan had said the day before that we would meet her. The Holy Spirit reveals future events to God’s children (John 16:13). We could share many things what God has done in Brazil with her. She was touched.

At this moment we make a stopover of a few days in Johannesburg and we are ready for the last 2 flights back to Madagascar.
A new period of 3 months can start again!