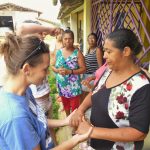 The second week of our stay in Brazil we flew 1500 km to the north to the state of Bahia. Bahia is tropical and humid. An air con is certainly in place.
The first week we were in the city of Santo Antonio de Jesus. Anthony and Daisy had been here before, so we received a warm welcome. Here too, we were greatly treated by our brothers and sisters with fruit, snacks and Brazilian meals. It seems that we will go back with a few extra pounds to Madagascar.

We had different meetings in a church to build the Christians in their faith. They were very grateful. Our translator asked for prayer for her eyes, because she had reading glasses. After a short prayer we asked her to read from a Bible with small characters. She was happy and surprised. She could read everything well! 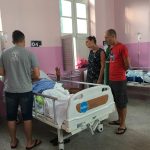 In addition to the services, we also visited a hospital in Nazaré. There were about 30 patients and all wanted prayer and noticed difference and healing. God is so great!
Arjan prayed for a young woman with dengue-hemorrhagic fever. During the prayer she touched her chest, because she already felt something happening. And after prayer she was very grateful for all pain was gone and she knew that the disease was broken. (more photo’s)

After a week in Santo Antonio we left for the city of Salvador. A Brazilian driver brought us there. The 3-hour ride led us through green hilly landscape with a shot of adrenalin. Because, like most Brazilians, our driver also thought he was a race car driver. They drive here from left to right using all lanes and avoiding oncoming traffic. The best description for this experience is that you participate in a road racing computer game. The motorcycles also press between the cars and shoot past you right and left.
Praise God for His protection!

Salvador is a million city and here, too, are poor neighborhoods and skyscrapers. The local Christians have put us in a luxury hotel with ocean view. We still have to get used to the fact that we are in a different world. With clean rooms, hot showers, good beds, air-conditioners, shopping centers, highways, skyscrapers, etc. 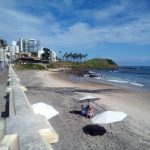 One evening we were invited by a Christian to share something at his house. He had invited his family and friends to this meeting. To our surprise we ended up in a large house which can be called a million villa for Dutch standards. A barbecue was outside with abundant meat. And a cook prepared filled pancakes on request.
The Christians were very blessed and many received healing and prophecies. Daisy and Amanda were able to encourage a young woman who was oppressed by enormous guilt due to abortion. Her mother continued to accuse her of her deed. Besides explaining that she was now forgiven by God, we prayed for a restored relationship with her mother. The next day we were informed that her mother had spontaneously asked forgiveness that morning and that the whole atmosphere had changed in the house. Praise the Lord!

This weekend a seminar was held about God’s healing. On Saturday we went to a large hospital with 24 people to heal the sick. Everyone came back enthusiastically and everyone had seen God doing miracles through their hands. It is always so beautiful to see that Christians find out that God also wants to work through them. You don’t have to be special for that. Jesus is special and He lives in us!

Tomorrow we will fly up north. The city of Natal will be our next destination.