If I take the wings of the morning, and dwell in the uttermost parts of the sea, even there Your hand shall lead me, and Your right hand shall hold me. – Psalm 139 verse 9-10 –

Going to the other side of the world to get our annual dose of flying hours. That is possible in 4 flights.
On the 1st flight we were sitting next to a Spanish young couple who had celebrated their holiday in Madagascar. They wanted to know what we were doing in Madagascar. Of course that’s a nice chance to brag about our great God. They were surprised that a life with God could be so different from religion and had many questions.
Everywhere we can make known the fragrance of Christ! 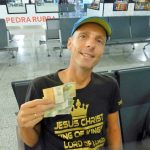 On our 3rd flight to Angola we were sitting next to an Australian woman who has been living in Angola for 6 years. She loved to hear what we were doing and gave us Angolan money, because she felt sorry for us to wait 4.5 hours for the next flight to Brazil. “Now you can buy something to drink,” was her reaction. We received money worth 15 dollar. How sweet of her and how wonderful our God is to provide what we needed in such a way. Daddy cares for His children!

In Sao Paulo we had to wait another 12 hours for Anthony and Daisy to arrive from Bolivia. So we enjoyed ourselves at the airport with occasional sleep on a bench, a walk outside and snooping around in the shops. A little hardship for a Brazilian adventure with the Lord. (photos) 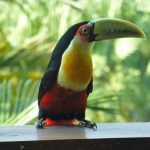 Sao Paulo is the largest city in South America. With a rented car we crossed this metropolis to cover the big distances. The city consists of neighborhoods with poorly built houses close together (for Madagascar terms normal) and large skyscrapers. Yet it is very green with lots of trees.
We stayed in a large house, which is a Christian community, originated in the 70s during the Jesus movement among hippies. At the moment there are 12 people living there, but they have also lived with 100. We were warmly received. The house was on a slope overlooking a forest. In the morning it was a cacophony of all kinds of birds. Magnificent. Sometimes two toucans came to sit on the balcony. Then you really feel that you are in tropical Brazil.

The Brazilian people are warm, open and very expressive. They talk with their bodies. A bit like the Italians. Even at the first meeting they give you a hug and kiss on the cheek. Equally very different from the Malagasy, who don’t show their emotions much.
The Brazilian cuisine is very diverse. We are treated greatly with delicious food offered by our brothers and sisters. We even had a chocolate pizza. 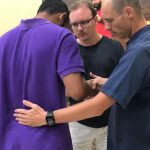 The first week we had different services in different churches. The Christians were edified tremendously in their walk with God. We saw people being healed of all kinds of diseases and many were encouraged by receiving prophetic words from God. Arjan prayed for a young woman who had a lung removed because of tuberculosis. She still had pain in her side. After prayer the pain was gone and she could breathe much better.
She could even run up and down the stairs of the church. Praise the Lord for His goodness! Nothing is too wonderful for Him.

In a house church we visited, we heard a great testimony of a woman who was dying 2 months ago due to cancer. Two days after prayer she was up and doing the dishes in the kitchen. Now she is completely healed and had gained strength.

Due to lack of space (and time) further adventures soon will follow.